Conor Williams has a moving tribute to Courtney Everts Mykytyn, the founder of Integrated Schools.

Louisiana schools chief John White is stepping down in March after eight years in the role. White has a number of accomplishments to be proud of–I’m partial to their highly-rated ESSA plan and their impressive gains in FAFSA completion rates–or Lauren Camera has a rundown of improvements under White’s watch:

Louisiana boasted a graduation rate of 81% in 2018, graduating more students than ever before and up from 72% in 2012, the year White was appointed – an increase that translates to about 5,000 students. More students also enrolled in college in 2018 than ever before, with more than 25,000 pursuing a postsecondary education.

Also since 2012, the number of students earning Advanced Placement credits increased by more than 3,800, or 167%, according to state records. And nearly 5,000 more students earned a college-going score of at least 18 on the ACT colleges admissions test.

Even on the National Assessment of Education Progress, an assessment of math and reading among fourth- and eighth-graders in the U.S. that’s showed stagnant and sometimes decreased achievement since 2015, the Bayou State has bright spots: Louisiana ranked No. 1 in the nation in 2019 for improvement in eighth grade math, the state’s pace of improvement since 2009 in all subjects exceeds national trends and it ranks among the top 10 for improvement over the last decade in all four subject-grade assessments.

Here’s an important new working paper on School Improvement Grants (SIG) from Min Sung, Alec Kennedy, and Susanna Loeb. Looking at two entire states (Washington and North Carolina) and two cities (San Francisco and an anonymous “Beachfront County”), they found large gains in reading and math achievement and high school graduation rates. Those gains grew over time, continued after the funding dried up, and were as large or larger for low-income students and students of color.

It’s becoming increasingly clear that the narrative that SIG “didn’t work” is wrong or at least incomplete. The better question now is not “did SIG work?” but rather “why did it produce results in some places and not others?”

Jill Barshay has a cool story about how John Jay College improved its graduation rates by focusing extra attention on seniors who were otherwise at risk of dropping out.

Now that it’s 2020, will people stop using the, “By 2020, 65 percent of all jobs will require postsecondary education” statistic? Note that over time some people have simplified the stat to say, “65 percent will have a college degree,” but the original source for the statistic, a 2013 report from the Georgetown Center on Education and the Workforce, included any “postsecondary education and training beyond high school.” As I noted on Twitter, we actually made it! As of November 2019, 68 percent of all employed civilians had attended at least some college.

If you like your apples sweet, juicy, and crunchy, I recommend trying the new Cosmic Crisp. Background story here.

It seems logical that motivated families leaving traditional public schools in favor of charter schools or private schools would harm the traditional school system. But that’s not what the research says, at least so far. 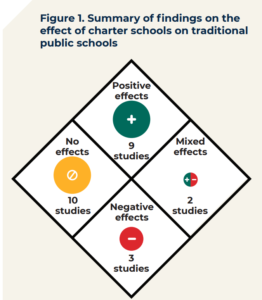 The studies included here were mainly looking at the early-stage phase-in of charter schools in various districts, and it’s possible that the balance might tilt away from charters as they grow their market share. But the evidence thus far suggests that charters either have no effect or perhaps even a slightly positive effect on traditional public schools.

Let’s start with a math problem. Say you have ten marbles. Eight are red and two are blue. If you blindly draw two marbles, what are the chances you’ll draw the two blue ones?

Now let’s say you have ten marbles, but this time five are red and five are blue. If you blindly draw two marbles again, what are the chances you’ll draw two blue ones this time?

The answer to the second question is ten times higher than the first (2/9 versus 1/45). By changing the composition of the problem by a little bit, the odds have changed dramatically.

This is roughly what’s happening in American schools. In 1968, eight out of ten students were white, and two out of ten were non-white. By 2012, the share of white students had fallen to about five in ten.

While students are not marbles, we’re facing the same basic math problem when we talk about school segregation. On the surface, American schools today appear to be more segregated than ever. The chance that a black or Hispanic student will attend a school with students of their same race has increased significantly, but that’s due to the composition of our society, not sorting. Once you take into account changes in student demographics, American schools are actually less segregated than in the past.

There’s a body of academic research documenting this phenomenon. But perhaps it helps to see it visually. The graph at right comes from a piece by Steven Rivkin for Education Next, documenting the decline in what’s called the “dissimilarity index.” 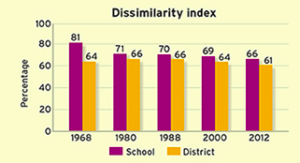 Most of these gains occurred in the 1970s, and the gains have been smaller since then. But remember, these gains are on top of America’s growing diversity. American society has become more diverse, and our schools have integrated even faster.

I’d like to see even more integration, for lots of reasons. There are real benefits to integration efforts, but we should be careful to diagnose our problems accurately, avoid distorting the data, and be wary of universal solutions. As our country gets more diverse over time, it’s going to look like segregation is getting worse. But we have to go deeper to understand what’s really happening.

Here’s a pet peeve: A champion of some particular education intervention will point to some research study showing Intervention X led to positive outcomes for participating students. Ok, great. Assuming it’s a good study, we now have evidence that Intervention X “worked” in a given Situation Y.

That does not mean Intervention X will easily replicate to new Situation Z.

Anytime you hear someone attach the phrase “high-quality” in front of some intervention, they’re talking about this problem.  These caveats pop up frequently in debates over particular reforms:

Some of these reflect implementation challenges. Others are more about politics (which is itself a particular type of implementation challenge). I am by no means the first person to make this point, but we can’t just say something “works” or “doesn’t work” without giving some consideration to where the policy worked, for whom it worked, what outcomes changed, and by how much it changed the status quo.

“Everyone knows” school segregation is getting worse, right? Well, no. That narrative has been fueled by a partial misread of the data.

It is true that absolute measures of school segregation are getting worse, but that’s mainly due to our diversifying country. In relative terms–how racially isolated are our schools compared to the underlying student population–segregation has not been nearly as dramatic. Here’s Brian Kisida and Olivia Piontek in a new piece over at Education Next:

In contrast, relative measures of segregation take into account the underlying composition of students, making them more comparable across locations and over time. They are also conceptually different in that they measure how evenly a given population of students is distributed across an entire school system. This makes intuitive sense, as segregation implies that some students are segregated from other students—relative to some underlying pool of students a school could enroll.

This issue with measuring segregation is well-known in the academic community, and there is ample scholarly evidence using relative measures of segregation that adjust for the underlying composition of students in school systems. Using these more sophisticated relative measures, such as the dissimilarity index and the variance-ratio index, examinations of trends find that segregation has been flat or modestly decreased over the past 20 years. In summary, massive resegregation is not occurring, and students are roughly just as evenly distributed across school systems as they were 20 years ago.

To be clear, segregation and racial isolation are serious problems in America and far more common than they should be, and efforts to shed a light on these problems are commendable. At every point in time between the Brown decision in 1954 and 2019, millions of American children have been educated in separate and unequal schools. This is an outrage that demands serious attention and action. But as we devise strategies and search for solutions, it is imperative that we are motivated by a complete picture of the problem we are trying to address. Segregation is a serious enough problem that it shouldn’t need to be worsening to be alarming. It’s bad enough as is.