In 1950, 34.3 percent of American adults had a high school diploma or higher. Over the next 30 years, that percentage would double.

Today, about the same percentage of adults (34.2 percent) have a bachelor’s degree or higher. Will that percentage double over the next 30 years?

That may seem like a crazy question. College is different than high school, for lots of reasons, not the least of which is that we’ve decided to draw an arbitrary line at 12th grade. After that point, we expect individuals to pay for some or all of their education costs. That arbitrary distinction may be changing, albeit slowly.

On a grand scale, the high school attainment rate looks like a pretty standard S-curve. After relatively modest gains in the 1910s and 1920s, growth rates started to accelerate in the 1970s and 80s before inevitably slowing down a bit since then: 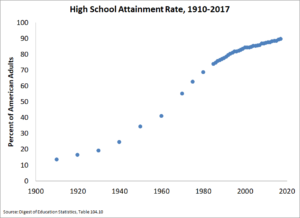 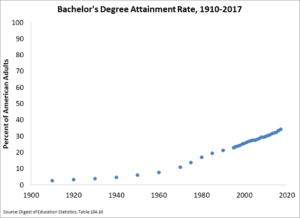 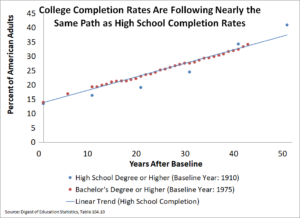 As I wrote in 2015, the key question is what happens next. Do the college attainment rates stay on the linear trend they have been on, or do they start to look more like the S-curve path that high school attainment eventually followed?

There are a lot of factors that will answer that question. Mortality and immigration matter here, of course, but so do education policies. In the last half of the twentieth century, we created things like compulsory attendance laws, the GED, and the GI Bill to accelerate our attainment rates, to name just a few contributors. At the high school level, we got better at tracking enrollment and completion rates, and we eventually started holding high schools accountable for graduating their students.

All of these efforts are further behind at the higher education level. It’s an open question whether we’ll make the equivalent policy adjustments in higher education as we did in K-12, but the answers to that challenge matter both to the individuals graduating today and to our broader society going forward.

Four years ago, I wrote about an eye-opening statistic: More American adults have dropped out of college than out of K-12 education. I recently updated the data, and the long-term trends are continuing: 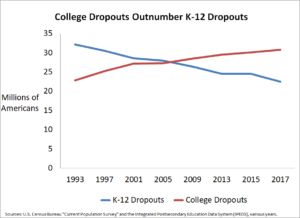 In pure, raw numbers, college dropouts are now a bigger problem than high school dropouts*. As of 2017, there were almost 31 million college dropouts compared to 22.5 million Americans with less than a high school diploma. Over the last decade, the number of K-12 dropouts has fallen by over 5 million people, while the number of college dropouts has risen by nearly 3 million. As I predicted, this divergence will only accelerate as older generations with lower educational attainment rates are gradually replaced by new generations with higher attainment rates.

Last year I wrote about how this trend should shape the future work of education reformers. My conclusion at the time still stands:

We’ve had some success in boosting low-level basic skills and getting more students through K-12 education, but we need a different set of policy solutions, and a broader perspective, if we’re going to carry that progress through to higher-level skills and higher college completion rates. Finding those answers will matter both to the individuals in our education systems today and to our broader society going forward.