Newark will no longer pay teachers based on their evaluation ratings and will instead pay teachers solely based on their experience and credentials. This runs counter to the overwhelming finding from the research literature that advanced degrees have little to no effect on student outcomes.

The city will also be making its teacher salaries even more back-loaded. Over the life of the four-year contract, Newark will boost salaries for new teachers by 4.7 percent, while increasing back-end salaries by 6.1 percent. By my read of the union’s materials, the district will ALSO pay longevity bonuses that kick in at 15, 20, 25, and 30 years of experience. I suspect those longevity bonuses are unlikely to have any noticeable effect on retention rates, and my hunch is that Newark’s teacher turnover problems are primarily driven by early-career exits. In other words, Newark is shifting from a pay structure that rewarded good teaching to one that ignores performance and shifts money away from the biggest problem areas. So, not great!

This is a good New York Times piece about states requiring students to fill out the FAFSA in order to graduate. I’ve long been a fan of mandatory FAFSA, and I think the Times piece actually under-sells it. It’s not just that there’s a correlation between FAFSA completion and college attendance; it’s that completing the FAFSA seems to cause more students to attempt college, perhaps because they’re made more aware of the financial aid for which they would qualify. For a number of equity concerns, my idea was to require FAFSA completion in order for a student to participate in a graduation ceremony, not withhold the diploma itself, but states seem to have been careful to design “opt-out” policies to get around those problems. I especially like how Louisiana state chief John White talks in the article about switching the default to everyone should fill out a FAFSA.

Instead of asking “does Head Start work,” Ashley LiBetti says we should be asking which strategies worked, for what population of children, and under what circumstances. Dale Chu asks similar questions about school turnarounds. In a thoughtful essay, he offers three conditions under which school turnarounds might be more likely to work.

Mike Antonucci stays with the Janus story and recommends we take the long view.

Ashley LiBetti has three things Head Start programs can do to get better.

The Center for American Progress has a new agenda for education policy.

A new working paper finds that, at least among survey participants, “the provision of growth data causes participants to choose less white and less wealthy districts.”

Here’s an interesting new study by Jason Grissom and Brendan Bartanen on turnover among Tennessee principals. The key graph is below: For the most part, principals who leave their positions are less effective, although the very highest-performers are also slightly more likely to leave. 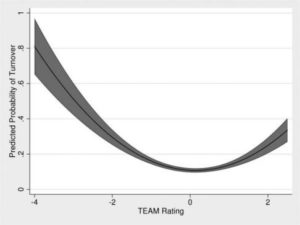 The stories coming out of Providence and Oakland right now are sobering. If nothing else, they are a reminder that there’s plenty more we could be doing rather than getting bogged down in the existential debate over ending poverty versus fixing schools. We can (and should!) do a better job of delivering educational services to low-income students than what these districts are providing today.