Mike Antonucci asks, if teachers unions are bargaining “for the common good,” what are the elected mayors and school boards on the other side of the table bargaining for?

A new paper finds that, “Social Security is the most equal form of retirement wealth and the most important source for most minority households,” and yet 40 percent of public school employees lack Social Security benefits.

“Just like an unpaid credit card balance that grows over time, the longer states delay paying off [their pension debt], the bigger the debt price tag becomes, consuming an ever-greater share of the finite pool of public dollars available for teachers and students.” Marguerite Roza quantifies the extent of that debt for California, Illinois, Louisiana, South Carolina, Texas, and Vermont.

Julie Squire is glad to welcome Cory Booker back into the charter school tent (where he had been for most of his career!).

Speaking of zingers, Mike Petrilli notes that Montgomery County leaders talk a good game on equity, and yet the district, “doesn’t offer a single extra penny to teachers assigned to the district’s toughest schools — those serving large proportions of kids living in poverty who often come to school with unmet needs and below grade-level proficiency.”

Here’s an interesting report by the Federal Reserve Bank of New York on household debt and credit. Two big takeaways: At least in the last 15 years, student loan debt delinquency rates are higher and much less volatile than other types of debt: 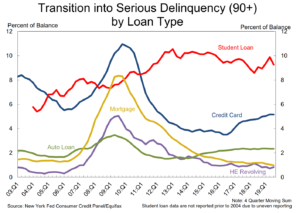 Two, delinquency rates are tied to age. Per the first graph, that’s largely tied to student loans, but older Americans have the lowest delinquency rates while the youngest adults have much higher rates of default: 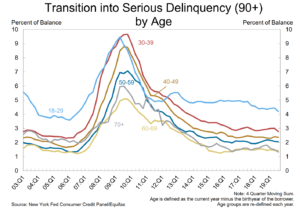 “…only a tiny minority of elementary and middle schools successfully support low-performing students to achieve gap-closing levels of growth.” Read Gwen Baker, Lauren Shwartze, and Bonnie O’Keefe on what to do about that. Their piece is part of Fordham’s annual “Wonkathon” contest. Read all those entries here, and don’t forget to vote!

Katrina Boone and Alex Spurrier predict what might be next for education in Kentucky.

“Through focus groups, budget analyses and interviews with three dozen district and community leaders, the study’s authors found a growing frustration that increasing pension costs were crowding out school districts’ budgets, forcing cuts to programs that parents valued and competing with salary increases for teachers needed to keep pace with fast-rising housing expenses in the Bay Area.” That’s from an EdSource write-up of a new PACE report by Hannah Melnicoe, Cory Koedel and Arun Ramanathan.

Part of me is annoyed it took so long for Cory Booker to remember his education policy, but I guess I should be pleased it finally happened. He writes, “The treatment by many Democrats of high-performing public charter schools as boogeymen has undermined the fact that many of these schools are serving low-income urban children across the country in ways that are inclusive, equitable, publicly accountable and locally driven.”

This Washington Post deep dive on virtual medical care in rural areas is super interesting, with implications for the education sector.