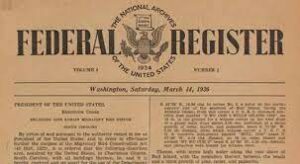 It’s been wild. A team of Goliaths stunned by a scrappy David. Few expected it. And it’s exciting to watch because it’s a little unpredictable even if Goliath has an edge.

But enough about the Capitals – Panthers first round contest in the Stanley Cup. I want to talk about public charter schools and the regulation aimed at slowing their growth.

Plenty of pixels have been spilled about the problems with the proposed regulation. It’s an assault on charters. Or it’s Cold Harbor, bloody and pointless. In some ways what’s more interesting is the politics. Often interest groups will decide to fight over something that’s not such a big deal because it’s a “Washington issue” or an important symbolic place to take a stand.

That’s not the case with these regulations, they’re just bad news if you think that providing parents with more public alternatives to traditional public school district schools is a good idea. In a nutshell, key parts boil down to letting Starbucks decide if anyone else can run a  coffee shop in various communities. They’re a real test of the politics of education right now. And charter schools are putting up more of a fight than many expected.

Jared Polis, the Democratic Governor of Colorado has spoken up about the regulations. Democratic Senators Bennet, Booker and Feinstein, too. That’s not enough opposition, but it’s not nothing.

We’ll see how much more charters will turn up the heat on the administration and Congress. The lines of attack are pretty obvious.

You can’t claim to “center” marginalized communities and do this regulation.

You can’t claim to follow the science or the evidence and do this regulation. Yes, there is a problem with the for-profits but it’s, in my view, best handled by better authorizing and state policy than blunt regulations. The for-profits have not created a sympathetic situation though.

And you can’t really claim to be for innovation, parent empowerment, or any of the rest and do this regulation. Whether because he’s a nice guy and ed writers are far too cozy with the establishment or because his team is picking his media spots carefully, no one seems to have really put any of this directly and strongly to Secretary Cardona who continues to say in the same breath that he supports charters and supports this regulation. We’ll see what happens.

The department has a few choices.

They can decide that the original calculus that organized special interests are more potent than disorganized parents remains and basically drive this through.

They could pull the regulations and start again. That’s not going to happen.

They could substantially modify the regulations in response to the feedback, the public comments were not helpful to the anti-charter side.

Or they could kick the can down the road through negotiated rulemaking and other process to delay it until after the election or longer.

I’d prefer that last option. I don’t think abortion will be the political get out of jail free card some think it will be for Democrats and the electoral map is daunting and the atmospherics  (inflation, the stock markets, crime, and culture wars) are all headwinds for Democrats. So, given the stakes, it seems like an incredibly ill-considered time to take the side of special interests against parents on an issue like this where a majority of Black and Hispanic parents support charter schools and independents positively associate with reform. I’ve seen some polling here and the school choice issue isn’t a slam dunk at the ballot box. But this position surely doesn’t help the broader frame around the Biden Administration right now, which is pretty soft, especially among Black and Hispanic Americans. If nothing else, why risk it?

What’s clear is the teachers’ unions and their fellow travelers appreciate the timing and the urgency. We’ll find out soon if the Biden team does.