It’s now political lore how a backbencher from Georgia started going to the well of the House of Representatives after the day’s business was concluded and howled at the moon – with only C-Span cameras as his immediate audience.

Newt Gingrich parlayed this strategy into real political power in 1994, but for a long time he was barking in an empty room, so many people understandably paid him little mind. Gingrich, for his part, realized his audience wasn’t the political class in D.C., it was people watching at home. I’m not a Gingrich fan, the opposite really, but you can’t deny he had an eye for change and opportunity.

I thought of that history when I saw this story in local Northern Virginia media the other day. Hang around certain places in education and there is a narrative you’ll hear again and again. In essence the serious people are sure that the future of education reform is largely a power struggle between “people of color” and white, largely Republican people and that if you just listen right you can discern community voice on a host of issues. It’s a comforting narrative, but out in the world something else more complicated is happening. 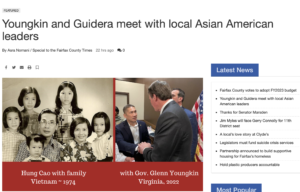 After Saigon fell to Communist forces in April 1975, Hung Cao’s family fled to nearby Reston, to make a new home for themselves in a low-income apartment housing complex, Cao, then a toddler, later learned English by watching the “A-Team.”

A subtle but real shift is showing up in the data like this this and this – Democrats are losing ground with non-white voters. It’s also showing up in some real political behavior – in Virginia but also Texas and elsewhere. It’s not baked. Politically education seems like a jump ball. Voters are willing to have a look at Republicans after the pandemic experience and some of the culture wars but Republicans have a lot of work to do to close the sale. Some of that work is retail efforts like the one that Asra Nomani chronicles in the article above.

If the Republicans can get their act together (I shouldn’t have to tell you that ‘if’ is doing an awful lot of work in that sentence) it’s an opportunity for them and something Democrats ought to pay attention to with an education agenda more robust than today’s lest it become another political tale of flat footedness. If it creates more healthy political tension and a more robust debate about how to improve schools that’s good for everyone.

Related to all this, we have a new tool out at Bellwether: A barometer on parent opinion.

And also related, there sure are a lot of kids not in public schools anymore. Nat Malkus’ return to learn tracker is a great tool.

“This has been a seismic hit to public education,” said Marguerite Roza, director of the Edunomics Lab at Georgetown University. “Student outcomes are low. Habits have been broken. School finances are really shaken. We shouldn’t think that this is going to be like a rubber band that bounces back to where it was before.”

After the school shooting in Michigan last year I wrote about how there are usually signs, and sometimes they are ignored. At The 74 Beth Hawkins looks into the school backstory of the person arrested in this ghastly Buffalo massacre.

Over at Fordham Daniel Buck comes out against financial education.

Honestly, though, whether financial literacy classes are effective is the wrong question to ask. Even if research found them increasing rates of saving or decreasing the rate of loan defaults, I’d still be skeptical of their inclusion in schools. The proper question to ask about any educational practice isn’t if it works, but how it compares to other interventions—and uses of the schools’ limited time and leverage.

I disagree, for a few reasons. First, sending students into the world equipped to understand it  (and have choices in it) is a key function of schools. Just because some places do financial literacy badly is not a reason to not want schools to do it well.

Second, while Buck is right it will take scarce time (that we should make less scarce), the thing about financial literacy is that it can also augment and reinforce math, literacy, civics and other subjects. As with many things curriculum matters as well as making sure it’s a relevant set of issues not abstract ones matters, too. Helping students understand some basic aspects of the financial world that will be thrust upon them while they are still teenagers is a good survival skill.

If you’re fortunate enough to have a parent or other adult who teaches you these things, that’s great. For everyone else, this is a small thing we can do to shave a few rough edges off of life for people. We make a point of giving student athletes and elite athletes counseling like this. Everyone can probably benefit.

Then again, I’m someone who thinks we should also make sure all kids can swim before they leave school, too.