On Wednesday we talked about how SEL is not inherently crazy political and to the extent people try to make it that way SEL leaders should push back.

Today, there is a new essay from Panic at the Pondiscio arguing SEL is not a Trojan Horse for CRT while also repeating his argument that some SEL activity does cross some lines from educational to therapeutic. Both are  important points that will at once antagonize right and left for different reasons. I don’t agree with the full scope of Robert’s SEL critique, though I think the blurred boundaries issue is one that is not getting enough attention in this hot house moment. Recommend the essay.

Also on Wednesday I mentioned this discussion I did with Kelly Pannek and Nicole Hensley from the U.S. Women’s Olympic Hockey Team. They won Gold in 2018 and Silver in 2022. We talked about coaching, teaching, relationships, drive, and why addressing gender inequity in sports is good for everyone. You can watch it here via the BARR Center’s feed.

The BARR agenda was a really thoughtful compilation of mind, body, culture and art. Great arc for a meeting. One final random note from the BARR conference. After the evening events ended Wednesday night I was walking across the hotel property to a friend’s room for a little party she was throwing. It was hard to miss that every few patios or so there was a group of teachers partying. The pools had teachers in them hanging out and partying. And it was not early evening, it was late. After two years of off-again and on-again interaction it’s so clear a lot of people want to be together and are ready to have a good time with others.

(And disclosures, so many. BARR is a client, Steve Mesler is a personal friend and I’m on his board at Classroom Champions).

The Boston Schools Fund puts out a terrific weekly round-up on what’s happening in education there. Today’s is must-read with regard to the Mission Hill situation. Surprised there is not more attention on this. OK not surprised, but still…c’mon.

This Noah Smith column is interesting and weirdly made me a little happier:

This morning I noticed that the New York Times blamed rising imports for the fall in U.S. GDP in the first quarter of 2022:

“The ballooning trade deficit, meanwhile, took more than three percentage points away from G.D.P. growth in the first quarter. Imports, which are subtracted from gross domestic product because they are produced abroad, have soared in recent months as U.S. consumers have kept spending. But exports, which add to G.D.P., have lagged in part because of weaker economic growth abroad.:” (emphasis mine)

The part in bold is not right. In fact, it’s the most common mistake in economics journalism. And it’s a mistake that helped to fuel Donald Trump’s misguided trade policies.

There is a tendency, I know I am sometimes guilty, to think that misconceptions in the media about your field are uniquely sloppy, common, or bad. Grass is greener, expertise bias, or whatever. There are certainly some issues with education coverage but in practice all fields have gaps of various kinds and commonly repeated mistakes or misconceptions that find their way into the political debate. It’s not good, nor helpful, but it’s a thing in life. And it’s not unique to education. Sometimes it’s ideological or biased, but sometimes people are just doing the best they can, reporting well is not an easy job, and things are confusing. Anyhow, a good reminder.

People ask! I have been awfully busy lately and the pics have been piling up. I have Katie Rouse, Jonathan Harber, Chad Ratliff, Simmons Lettre, Ben Wallerstein, and more! I will get to them. For now, here’s a pic Dan Willingham sent. It’s a nice one to end the week. And because the past few weeks have been a little rough for a lot of people Dan’s the perfect fisherman to highlight. He doesn’t even fish. He sent me this note: 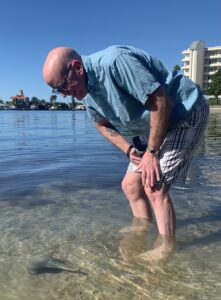 That is close enough for what we do here. Especially because Dan is one of the nicest, most caring, and most committed people you will run across in this sector. Genuinely lovely human. And his work (at least the stuff he and I don’t collaborate on) is really valuable for the field and will push your thinking. All of which is why it’s a great pic to feature even if Dan didn’t actually catch the fish.

Finally, for the real Dan nerds, here’s a track from the archives. An article Dan and I did together was recently traducido al español y publicado en Chile. Puedes leerlo aquí. Originales aquí.

Have a warm, in all senses of the word, weekend.