Happy New Year. K-12 education is the one issue where Democrats don’t think giving money and power to poor people is a good idea. And it’s the one issue where Republicans generally do. After two years of pandemic disruptions, parental frustration, and a political shift is 2022 the year we square that circle a bit? Stay tuned.

Second, on the Substack email version the subhead was a bunch of gibberish. This was not a placeholder or something. What happened is that pushing the post to Substack on the morning of the 24th was something I was doing distracted – by a dog who understandably wanted to do other things. And I did, too. He was pawing the keyboard because he knows that makes me pay attention. I neglected to notice the key strokes. That’s on me, too. Here’s a picture of the little villain enjoying some snow earlier this week. 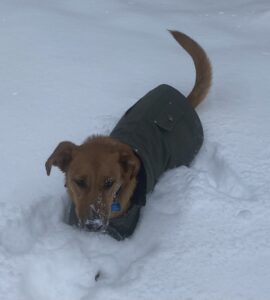 At this rate, it is a cold, hard and shameful truth that these students are on track for failure — never acquiring the skills they need to gain entry into either professional jobs, including teaching, or trade-based careers. The result, of course, is a perpetuation of intergenerational poverty.

These are not things we like to say out loud. But decades of experience tell us they are true. To begin changing them, we need to say loudly and clearly — as Democrats, Republicans and independents — that teachers are essential workers, we need them physically present in classrooms, and we will not stand for walkouts.

At the same time, we should stop using the phrase “remote learning.” “Remote languishing” is closer to the truth, as parents know all too well. They are justly furious that schools have left their children to flounder through virtual classes.

It’s unclear Virginia Democrats actually got the message voters sent in the last election. Arlington County basically wants to make it next to impossible for teachers to hold students accountable for academics – in, you know, school. Teachers understandably are saying c’mon…

And on Virginia, Matt Taibbi has been systematically going through the whole Loudoun County saga. It’s brutal.

Last month I noted that The Times had pretty credulously bought a narrative from a school board member there:

…if you’re going to use former school board member Beth Barts as a source, you’ve also got to look at things like the secret Facebook group targeting dissenting parents, threats of doxing, and issues like that. There was a lot going on around LCPS… And not a few Loudoun parents were like, “I’m not on board with the anti-“CRT” stuff but what I also don’t like is any kind of targeting of dissent and the anti-anti-CRT stuff is bad news, too.” Barts resigned in the face of both public and formal scrutiny.

Taibbi offers chapter and verse on all those shenanigans. And also the observation that,

Imagine asking a person incapable of learning the rules to Candy Land to pilot a 747 in a snowstorm, and you’re close to grasping what it meant to Loudoun to have Barts in elected office while the county tried to navigate a national controversy.

He also notes that,

It was impossible to make it through a paragraph of most of these national accounts without hitting a bluntly provable lie.

That was the problem with the “narrative” all the way along. Terry McAulliffe is a political pro, he should have known better. But the average reader of these accounts deserved better than they got. Taibbi also makes the point a lot of people have been saying privately – Dems sure picked a hell of a time to decide to become repellent to parents.

It’s a four-part series that covers the inception of the current discontent to where we are now with recalls pending. Has details that will surprise most. It’s also far and away the best reporting on the whole episode(s).

In a related vein, Ruy Teixeira on Asian voters and education:

Which brings us to the key issue for many Asian voters: education. It is difficult to overestimate how important education is to Asian voters, who see it as the key tool for upward mobility—a tool that even the poorest Asian parents can take advantage of. But Democrats are becoming increasingly associated with an approach to schooling that seems anti-meritocratic, oriented away from standardized tests, gifted and talented programs and test-in elite schools—all areas where Asian children have excelled.

It does not seem mysterious that Asian voters might react negatively to this approach. In fact, it would be mysterious if they didn’t.

Randall Kennedy, his book was on the 2021 book list, if you want an overview he talks to The Nation.

From the Holmes trial, this is close enough to education for us, via Money Stuff:

Part of Holmes’s defense to the charges of defrauding investors was that those investors did so little due diligence that at some level they must have wanted to be defrauded. This defense did not work, and I am not sure it is a valid legal defense, but I sympathize. One of the charges on which she was convicted was defrauding Betsy DeVos’s family office out of a $100 million investment. Lisa Peterson, a DeVos family investment manager, testified at the trial:

Lance Wade, a lawyer for Ms. Holmes, asked Ms. Peterson, an investment professional, if she was familiar with the concept of due diligence.

“You understand that’s a typical thing to do in investing?” he said. …

Ms. Peterson testified that she was scared Ms. Holmes would cut her firm out of the deal if they dug deeper into the details of Theranos’s business.

“We were very careful not to circumvent things and upset Elizabeth,” she said. “If we did too much, we wouldn’t be invited back to invest.”