This tweet below is getting a lot of attention. And given that I just wrote this week on what could be characterized as the need for more heterodoxy in the sector, the debate about it seemed well-timed.

Breaking 8 months of radio silence to say I’m proud to be on the Board of Advisors for the Foundation Against Intolerance & Racism, a nonpartisan effort to advance civil rights and liberties, and a common culture of fairness, understanding and humanity. Join us. @fairforall_org

It seems like there is a tendency in education to see the divides in American life, and the education sector, through pretty binary terms: left-right political terms, racist v, antiracist, woke v, not woke, white or not white, or Dem-Republican. And often good v. evil* or similarly Manichaen terms. The various subtweets and responses to the Pondiscio tweet illustrated all that. It’s what drives social media, sure, but it’s probably not an especially useful way of looking at the world right now.

Yes, the country is definitely divided – if you somehow need more evidence we just had a big national argument about a Bruce Springsteen commercial. Yet do these common typologies really work or explain that much? For instance, just thinking of things in white – not white terms obscures significant changes in political behavior that will impact our sector going forward, the reality of school choice politics, and the composition of this new organization Pondiscio is tweeting about. It also obscures why people on Twitter were baffled at Chicago school CEO Janice Jackson’s response on removing police from Chicago schools but no one near the issue was particularly surprised. Meanwhile, it’s anyone’s guess what the GOP is even about anymore and Democrats are divided over a host of policy questions. Though Dem infighting is nothing new, overall the old labels obscure as much as they reveal.

So here’s some food for thought on what seems like more salient divides worth talking across, and especially when thinking about impact on schools and education:

Education levels, geography, church going, and generational/age divides are obvious ones. The age breakdown on a number of issues, across parties, is striking. Also, activists v. normies, service workers versus zoom workers, people who trust family and friends versus those who look to “experts,” and traditionalist versus cosmopolitan outlooks all have explanatory leverage. Just think about the debate over school reopening for an example of many of these as well as, of course, race.

And then, especially among elites, it’s hard to miss divides about race and racism and whether racism is a past wrong or present problem, about the historical arc of the country, about empiricism versus alternative theories of knowing and understanding, pluralism versus wokes, and even the idea of e pluribus unum versus different forms of secessionism, including identitarianism, an abandonment of the public square by the affluent and calls for actual secession.

Even in politics, there are plenty of divides party fails to capture. This slide from an Echelon deck highlights an issue that cuts across the education sector. 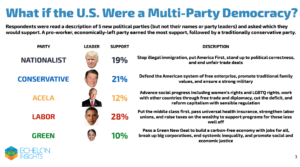 Given the overall political demographics the key education debates are often between Labor, Green, and Acela types at least as much as positions are right – left. This leaves three groups politically homeless. Political conservatives/libertarians and heterodox Dems or centrists and independents who all see value in various positions favored by Labor, Green, and Acela types but are also skeptical of other ideas those groups espouse. The weird politics of education tend to lump all these people together, which annoys centrists, Dems, and reform liberals who are not conservatives, and annoys conservatives as well. Libertarians are always annoyed by everyone.

What does any of this mean for you? I don’t know! Obviously social media is not real life but you hopefully knew that already. But I’d suggest the next time you hear a take that sounds reductionist, dig a little deeper because it might be and might be obscuring a trend it’s useful to know about or understand whether or not you happen to like it. We do a lot of advising for clients that’s really about understanding the nuance of what’s going on and the direction things are going rather than our own views on various things. We get hired because we can do that, not for our “takes.” We have a norm around Bellwether we call the “Cannon rule,” which is just about describing people who hold a view in terms that they would recognize and respect, whether or not you agree with them. That helps, too.

What else? Unpack values and evidence. And also recognize where some issues or arguments simply can’t be reconciled. Finally, if there is an upside to lots of divides rather than binary politics, it’s the opportunity it presents for creative coalition politics to get things done. The world, and especially the education world, is thankfully not as 50-50 as the United States Senate right now and it’s more interesting, too.

*To be clear, I do think there is evil and evil in the world, I just don’t think you find it in run of the mill policy and political disputes as often as a lot of people seem to think.