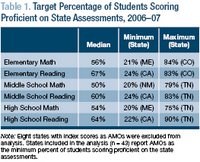 Eduwonkette continues the curriculum narrowing debate. You can read the whole backstory below but here’s the punchline: Her argument basically seems to be that No Child Left Behind focuses on math and reading so schools are being forced to, or incentivized to, cut other subjects. This argument would have more merit if (a) plenty of schools were not managing to get over the relatively modest bars* without doing this (b) research was not pretty clear that the best way to improve test scores over time is to actually, you know, teach rather than take shortcuts (c) the best way to teach subjects like reading was not to teach them across the curriculum via things like history and social studies rather than as discrete subjects and (d) more schools and school districts were seriously examining how they spend their time on these subjects rather than just how much time gets spent. Otherwise, spot on!

Some schools are responding badly to a law that — all the rhetoric aside — basically says that you need to teach kids to read and do math at the state defined “grade level” in grades 3-8. So, because it turns out that some schools can’t do that (Surprise! We have a 50 percent dropout rate for minorities and big achievement gaps, who knew there were some crummy schools?), do we jettison the requirements or get serious about ensuring that more schools can get over the bar? She doesn’t really say.

I suspect that Eduwonkette and I agree that we need to do more to help low-performing schools deliver better instructional programs. So that’s not at issue. And, notwithstanding my concerns about the smoke and confusion being thrown up around curriculum narrowing, I actually would like to see some broadening of the No Child law’s requirements beyond math and reading but not at the expense of proficiency in those areas (nor do I want to see a lot more testing than we do today).

But, considering that there are few parents out there who don’t want their kids passing these tests (and fewer people still in the education community who would be so blasé if it were their child’s school struggling to do it with their child) my challenge for Eduwonkette is to offer up what sort of requirements for school accountability she’d support. How many kids, or what percent, should a school have to teach reading and math to, well, in order to make “adequate yearly progress?” What’s the bar below which no school should be allowed to fall? Should less be expected in terms of performance from schools serving a lot of poor or minority kids because they are more challenging populations based on the data? How many other subjects should we test students in if we don’t want to just focus on reading and math? These are not abstract questions. And unless we completely walk away from a focus on literacy and numeracy under the guise of adding additional subjects to No Child Left Behind’s requirements, they are exactly the ones policymakers will be wrestling with when the law comes up for reauthorization. (And, of course, I’d really like to know at what pass rate requirement does it become excusable to start cutting other subjects because you’re “responding” to NCLB’s “powerful incentive” to teach reading and math!?)

*This is a point worth mentioning in more depth. The table at the top of page 8 of this report (pdf) and reproduced above (though probably hard to read on small screens) shows the high, low, and median pass rates required to make “adequate yearly progress” in 2006-07 and the appendix starting on page 13 breaks the states out. You decide if getting that percentage of kids over the cut score (pdf) on the state test is really so demanding that it’s necessary to cut these other subjects to do it. I can’t get too worked up about requiring schools to get 2/3rds, or less, of kids over the bar in elementary school…Related, see also this.